“Upon information and belief, Commissioner Douglas Underhill no longer resides in the district he was elected to represent. The official records reflect that his residence was sold in 2022, and he purchased a property in another district in 2021,” the letter signed by Commissioner Chairman Jeff Bergosh states.

Underhill sold his Perdido Key home earlier this year. Redistricting moved the home from District 2 to District 1, but the law allows him to remain in office through the end of his term — if he lives in District 2. In 2021, Underhill purchased a District 5 property in North Escambia, just over a mile from Atmore. 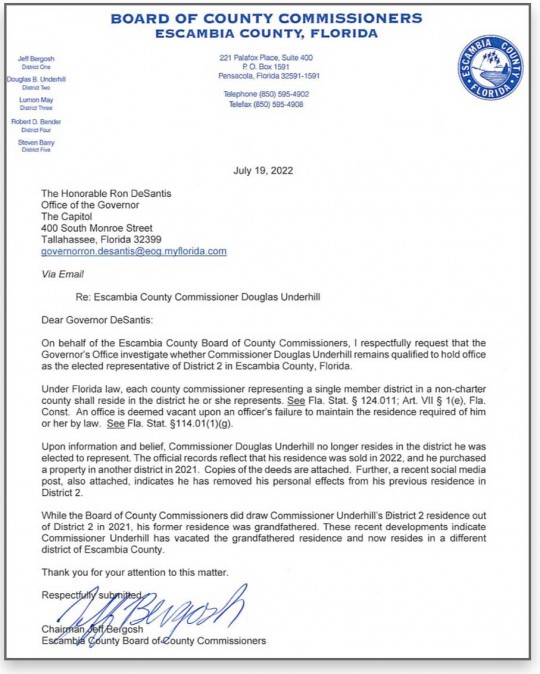 “Underhill has vacated the grandfathered residence and now resides in a different district of Escambia County,” according to the letter to the governor.

A screenshot provided to Bergosh of a July 7 Facebook post with free furniture and other items posted by Underhill’s wife stated that they had two days remaining to clear everything off their Sally-damaged property “before the buyer takes possession”.

“So we sold and rent back until I’m done with my service. None of this is news, and if you are worried about this more than our budget you suck and you are why Escambia County sucks,” Underhill wrote on Facebook Tuesday night in another post cited by Bergosh,

“It seen incongruent. It seems inconsistent. So I think we need to get to the bottom of it based upon citizen complaints,” Bergosh said during a Tuesday morning commission meeting.

“Guys, do what you want to do. I certainly look forward to an investigation from Tallahassee into what is clearly more of the pattern of retribution against me whistleblowing on y’all’s 401(a) thing,” Underhill said.

“I know you don’t, but you certainly supported what these guys are doing,” Underhill replied to Bergosh. “In my opinion, it’s theft, and I whistle blew on it.”

The commission currently has a lawsuit pending over a 401(a) annuity plan the county contends is legal for local for elected officials and senior management. It does not cost taxpayers anything beyond a typical FRS plan.

“Redistricting me out of my district, taking me off all of the committees, all of the other things we’ve done. The censure, that little foray we had,” Underhill continued. “All of those are really the same kind of pattern of retribution for what I did for outing this issue for the 401(a).”

In reference to the Facebook post stating the family needed items out of the home for the new buyer in two days, Underhill told Bergosh that “is none of your business”.

“The matter is very clear…but if y’all want to do this, let’s send it to Tallahassee; let’s have that discussion,” Underhill said. “Gentlemen, do as you wish. It really makes no difference.”

Underhill gathered his things and walked out of the meeting during the motion and 4-0 vote. It was the last item on the agenda for the day, and the meeting concluded less than a minute later.