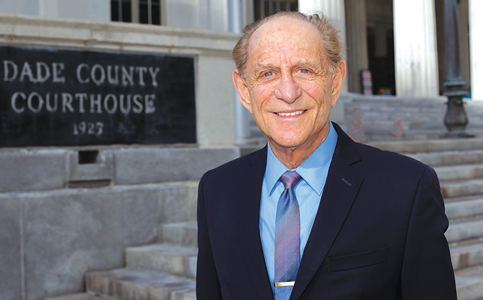 Harvey Ruvin devoted 50 years to the public as an elected official in Miami-Dade County, a record that is likely to stand unmatched. Yet as an early environmentalist he was as proud of his service to the planet as he was of his service to the county. In both endeavors, he was both respected and well-liked.

County commissioners late last year had planned to present Mr. Ruvin at age 85 a proclamation for his service, but illness kept him away from that commission meeting, and the public acclaim for more than a half century of service never came before he was claimed by cancer on New Year’s Eve.

Mr. Ruvin as Clerk of the Courts of Miami-Dade County and Ex-Officio Clerk of the Board of County Commissioners was for more than 30 years the county’s principal recordkeeper. Few officials could claim his popularity with the voters, as evidenced in 2020 when more Miami-Dade residents voted for him – nearly 759,000 people – than any other candidate on the ballot. That included races for president, Congress and the county mayor. The personal popularity was all the more remarkable in that his name appeared on every traffic citation that the county issued.

Mr. Ruvin, who in 1972 went from being North Bay Village mayor to winning and holding a Miami-Dade Commission seat for 20 years before then becoming county clerk, was low key for an elected official and always shifted credit for his lasting public favor to his staff.

“During this pandemic, the people in my office have been heroic,” he said in 2021. “We were the first clerk’s office to go electronic, and it positioned us to be proactive and made our records much more accessible. My employees took the extra steps, and when judging me, the first thing on the electorate’s mind is how great someone was when they needed information. Why make a change?”

As the custodian of all county records Mr. Ruvin felt it was vital that the clerk’s office remains non-political. The last thing the public should think, he said, is that records are being manipulated or inaccurate. “So, I try to stay away from politics. The one exception is, I remain active on environmental and climate change issues. I just have so much of my life invested in that.”

Many of today’s core environmental efforts in Miami-Dade County are the result of ordinances and policies that Mr. Ruvin set forth as a commissioner decades before climate change was a commonplace concern. Among them: Miami-Dade’s residential and commercial recycling system, efforts to curb greenhouse gases that offset 40 million-plus metric tons of carbon emissions, an endangered land preservation program that at the time of its creation was the largest of its kind in the nation and, more recently, leading the county’s Sea Level Rise Task Force.

“I try to take the long view,” he said. “Short-term, you’ll have deniers and people more focused on immediate things, but solutions have to be put in place long before these unimaginable impacts get here.”

In such efforts, he crossed party lines and alliances, working with all and listening to everyone’s concerns. He spoke ill of few and praised many, an official elected countywide who had the respect of colleagues. He preferred to persuade rather than attack those who opposed him on an issue, and he did so successfully. He always preferred to give credit for successes to others.

Covid-19 tested his long-time practices, and he adjusted the operations of the 1,200 employees in the clerk’s office and his own, handling most operations remotely as far south as Homestead, as far north as Aventura and west in Doral.

His father ran a delicatessen, and he often spoke fondly of the famous people he had met while delivering a lunch or a dinner. He and his wife Risa enjoyed dining out with others in the community, but never on Wednesday evenings, which were reserved for “the game” – poker with long-time friends.

He was a life-long sports fan and often talked of his beloved Dodgers (the Brooklyn variety) and of being in the stands when a famed 1951 home run by the New York Giants’ Bobby Thomson sank Brooklyn’s pennant hopes. He was in a newspaper photo with a school friend showing where the ball landed.

As an adult he played racquetball. He traveled around the United States playing in tournaments, rising as high as 16th in the nation.

In later life, he was an avid fan of Miami Heat basketball, another sport in which his teenage ties were keen. He also practiced transcendental meditation, crediting it in part for his mental acuity and physical fitness. In his final years he took up chess with associates from the clerk’s office.

Rare for a political figure, he had no known enemies or even detractors. He told Miami Today in 2021 that his personal philosophy was to “think positively. Treat people the way you’d like to be treated.”

He never thought of holding office beyond the Miami-Dade boundaries, he told Miami Today.  “A legislator’s job, whether congressional or state, is to push a button yes or no, though some take the initiative, hold hearings and try to develop ideas for legislation. In local government, you pass an ordinance and immediately get feedback. You can make changes, tailor things. The county commission was much more interactive and fulfilling.”

After he got his law degree in 1962 he practiced law, mostly jury trials, and looked at specializing in environmental law. He then became the Mayor of North Bay Village in 1968, a parttime role. He ran for the county commission in 1972 and won. He never lost an election thereafter, for half a century.

Reflecting on his days as county commissioner, he noted the difference from today’s 13-member commission elected from 13 districts, with a strong mayor replacing the mayor-manager system in which he worked.

“I served on the commission with nine members,” he said. “The mayor was a member. His function was to chair the meeting. We had a county manager whose function was to be the county’s administrative head, appoint all department directors and run the government. The mayor was merely the political leader, and the eight commissioners ran countywide even though we were elected from geographical districts. Having invested 20 years in that system, I thought it worked well. We all had the county as our interest, not a parochial piece of it. Even if you were in an area where there weren’t many minorities, you still had to be concerned about and address those issues. You had to go to every precinct in the county to seek votes and show you wanted to be responsive to everyone.”

Later he held a dual role as clerk of courts and clerk of the Miami-Dade Commission. The position was set out in the state constitution, with the clerk, in addition to giving clerical support to the court system, serving as the county auditor, the depository of county funds and clerk of the board.

He saw changes in that role, too, reflecting two years ago that “When I entered this office in 1992, we had about 1,700 employees. We now have a little under 1,200. With technology, I’ve gradually reduced the workforce and our personnel budget. I’ve done it through attrition. When people retire or leave, I don’t fill those positions. I try to mentor people to take higher positions, move up the ladder. That’s a long-term management effort all my divisions are focused on.” Wearing his environmental rather than elected official hat, Mr. Ruvin was long active in climate change issues. In 1990, he was a founding member of the International Council for Local Environmental Initiatives, ICLEI, as a representative of what was then Dade County. Its goal was to create a network to share information on the issue and participate in annual meetings the United Nations holds, the Conference of the Parties. He attended six of them.

“I was once vice chairman of the international ICLEI, then president of ICLEI USA,” he recalled. “We have an active group now coordinating our best practices and being a consultant to American cities and counties.”

He also served as president of the National Association of Counties in the late 1980s and remained on the board of directors until his death.

29 Amazing Things to do in St Augustine