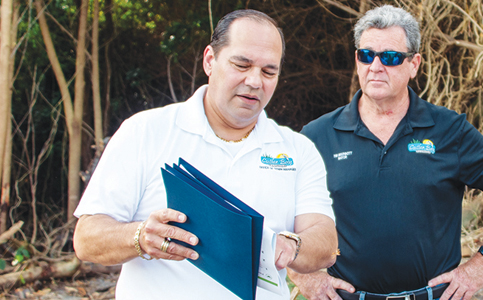 Rafael Casals started his professional career in 1985 when he was only 17 and signed up for a program as a senior at Homestead High to attend classes half a day and work the other half.

He started part time in the Finance Department in Florida City doing accounts payable and payroll. As soon as he graduated, he started a full-time position while attending Miami Dade Community College.

“I was able to plug in when somebody was on vacation, go learn how to do purchasing, go learn how to do work with Public Works Department, help with other departments, fill out grant applications, work in the mayor’s office answering the phones,” he recalled.

He then started his studies at Florida Atlantic University after earning a Pell Grant.

In 1992 he was still working in Florida City when Hurricane Andrew hit, an experience he says shaped him into the manager he is today. “I think that Hurricane Andrew also molded me as a person and to understand how to deal with chaos,” he said.

After the hurricane, he re-applied to FAU since he took a year and a half to work on rebuilding the city, and he finally earned his degree. Mr. Casals decided it was time to learn in other locations, so he joined North Bay Village as public works director. Three months later, the city manager retired, so Mr. Casals decided to apply for the position and he got it.

After four and a half years, he decided to begin another chapter in his professional career and joined the Town of Miami Lakes as an assistant manager. As a newly incorporated municipality, Mr. Casals was able to have many experiences that shaped him for the responsibilities he was to undertake three and a half years later.

Mr. Casals joined the Town of Cutler Bay in 2005 as public works director. In 2012 he was appointed interim town manager, and a year later he was formally named town manager. He now serves the 46,000 residents of Cutler Bay and is responsible for implementing the official policies of the town council.

To read the full article and the rest of the Miami Today issue, subscribe to e-MIAMI TODAY, an exact replica of the printed edition.

What Are Those Fluffy ‘Cotton Balls’ Floating Around Mass.?